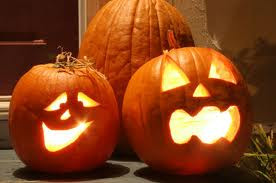 Although the religious significance of Halloween has passed for the general public, Halloween is a “magical” night for many!

On this magical night years ago, glowing jack-o-lanterns, carved from turnips or gourds, were set on porches and in windows to welcome deceased loved ones, but also to act as protection against malevolent spirits. Burning lumps of coal were used inside as a source of light, later to be replaced by candles.

When European settlers, particularly the Irish, arrived in American they found the native pumpkin to be larger, easier to carve and seemed the perfect choice for jack-o-lanterns. Halloween didn’t really catch on big in this country until the late 1800’s and has been celebrated in so many ways ever since!

Pumpkins are indigenous to the western hemisphere and were completely unknown in Europe before the time of Columbus. In 1584, the French explorer Jacques Cartier reported from the St. Lawrence region that he had found “gros melons”, which was translated into English as “ponpions,” or pumpkins. In fact, pumpkins have been grown in America for over 5,000 years.

Did you know that pumpkins are not a vegetable – they are a fruit!  Pumpkins, like gourds, and other varieties of squash are all members of the Cucurbitacae family , which also includes cucumbers, gherkins, and melons.

Google ‘pumpkin carving’ for an enormous menu of ideas for carving your pumpkin to welcome special visitors to your door this year!

Thought we would share these ideas once again to enhance your Halloween event!

1.  Add to your table decor by using a pumpkin to hold your vegetables.  Cut a pumpkin almost in half, cutting the top in a jagged edge design.  Clean it out and dry well.  Display carrots, celery, broccoli, etc. in the pumpkin bowl.  Cut the top off a smaller pumpkin to use as a bowl for vegetable dip.

3.  To be the scariest looking house on the block, put a strobe light  in the window.  The effect from the outside looks like lightning and will bring all the neighbourhood kids to your door!

4. Do you like glow sticks?  Purchase a bunch at your local dollar store and attach some to your child’s costume so they can be seen in the dark.  Or, fill black balloons with helium and attach a long string or fishing line (so it is not visible).  Then tie on a glow stick somewhere on  the string/line.  Secure the string somewhere on the ground and let it float over your house for an eerie look.   (FYI: It is not safe for nature to release helium balloons into the sky and St. Catharines by-laws do not permit it.)

Looking for a Halloween Party?