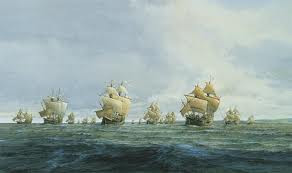 In the year 1578, Martin Frobisher, on his mission to find a northern passage to the Pacific Ocean, landed in Newfoundland and held a formal ceremony to give thanks for surviving the long journey.  Other explorers did the same and shared their food with the indigenous people of the area as well as setting up what became known as the “Order of Good Cheer.”  As many more settlers arrived in Canada, celebrations of good harvest became common.  Frobisher’s fleet of fifteen ships is still the largest maritime expedition ever mounted to the Arctic.

In 1957 the Canadian Parliament proclaimed Thanksgiving to be observed on its’ present date, the second Monday of October.