History of Thanksgiving for Canada 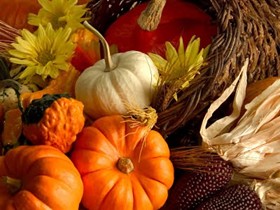 The history of Thanksgiving in Canada goes back to an explorer, Martin Frobisher, who had been trying to find a northern passage to the Pacific Ocean. In the year 1578, he held a formal ceremony in Newfoundland to give thanks for surviving the long journey.  Other explorers did the same and shared their food with the indigenous people of the area as well as setting up what became known as the “Order of Good Cheer.”  As many more settlers arrived in Canada, celebrations of good harvest became common.  New immigrants into the country added their own traditions to the harvest celebrations.

Thanksgiving did not have a fixed date until the late 19th Century, when it was typically held on November 6th.  After the end of World War I, Thanksgiving Day and Remembrance Day ceremonies were usually held during the same week.  To avoid the two holidays from clashing with one another, in 1957 the Canadian Parliament proclaimed Thanksgiving to be observed on its’ present date.  Today, Thanksgiving is celebrated on the second Monday of October in Canada.

…the long fleshy skin that hangs over a turkey’s beak is called a snood?

…the color of a wild turkey’s naked head and neck area can change blue when mating?

…male turkeys are nicknamed “toms” while females are called “hens”?

…when turkeys reach maturity they can have as many as 3,500 feathers?

…wild turkeys can run up to 55 miles an hour? 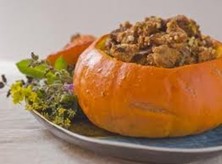 Making the stuffing in the slow cooker (crock pot) is one less thing to worry about and it takes up less oven space.

Melt butter in a skillet and sauté onion, celery, parsley, and mushrooms. Pour over bread cubes in a very large mixing bowl. Add all seasonings and toss well. Pour in enough broth to moisten. Add eggs and mix well. Pack lightly into slow cooker. Cover and cook on low and cook for 6-8 hours. Serves 12.

HINT:  Want a moisture turkey?  Cook the turkey breast side down!  Cook the stuffing separately so the turkey can cook more evenly.  It works!