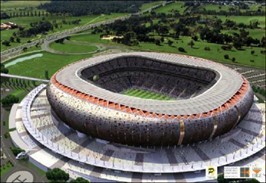 There are 32 teams that have qualified for the Soccer World Cup 2010 in South Africa. They will play in 8 groups, with four teams in each group.

After the group stage of World Cup 2010, two best teams from each group will play in “Round of 16”, each team will play one match. Winners will then play quarter finals, semifinals and then, the World Cup final match will be played on 7th of July 2010!

Are you up for it? Again, here is your chance, as a Salisbury client, to WIN $100 at the St. Catharines KEG and add more fun and excitement to watching the World Cup 2010.

When adding a comment, tell us who you think will win The World Cup, and why. If you don’t know anything about soccer or the history that brings these teams to the World Cup competition, click on the links on the right hand side to easily educate yourself.  Don’t wait –  cast your vote now!  The Games begin on June 11th, 2010 ending with the final game on July 7th, 2010.

If more than 1 winner, a draw will take place for the prize.  The winner will be announced when the games are done.