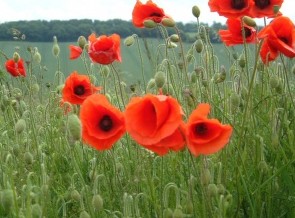 They ask for 60 seconds once a year and that is all,
When we will recognize them, those who stood so brave and tall.

They spent their 60 seconds, all in fear and all in pain,
those horrific 60 seconds spent for freedom we would gain.

60 seconds took so long as he watched his buddy die,
60 seconds for a nurse who knew she had to try.
60 seconds went so fast as the bombs came pouring in,

Only 60 seconds to find courage from within.
Another 60 seconds and he would face his greatest fear.

Those endless 60 seconds as the wives waited to hear,

They asked for 60 seconds so we’d know the price they paid,
when they spent their 60 seconds and in hell our freedom made.

They asked for 60 seconds once a year and that is all,
to stand in peace-filled silence and hear the bugle call.

On the 11th hour of the 11th day of the 11th month, Canadians are asked to pause in memory of the thousands of men and women who sacrificed their lives in military service.

At public gatherings in Ottawa and around the country, Canadians pay tribute with two minutes of silence to the country’s fallen soldiers from the First World War, the Second World War, the Korean War, the Afghanistan conflict and peacekeeping missions.

Also known as Veterans Day in the U.S., Remembrance Day was first held throughout the Commonwealth in 1919. It marks the armistice to end the First World War, which came into effect at 11 a.m. on Nov. 11, a year earlier.

It isn’t a national holiday across Canada, but employees in federally regulated employees do get the day off. Several provinces and territories – including Alberta, British Columbia, New Brunswick, Newfoundland and Labrador, Northwest Territories, Nunavut, Prince Edward Island, Saskatchewan, and Yukon – do observe a statutory holiday. 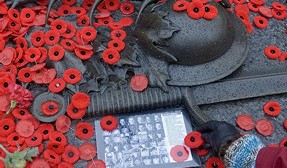 The association between the poppy and war dates back to the Napoleonic wars, when a writer saw a field of poppies growing over the graves of fallen soldiers.

During the Battle of Ypres in 1915, Canadian Lt.-Col. John McCrae was inspired to write the poem In Flanders Fields on sighting the poppies growing beside a grave of a close friend who had died in battle.

The poem was a great inspiration in adopting the poppy as the Flower of Remembrance in Canada, France, the U.S, Britain and Commonwealth countries.

The first poppies were distributed in Canada in 1921.

Today the volunteer donations from the distribution of millions of poppies is an important source of revenue for the Royal Canadian Legion that goes toward helping ex-servicemen and women buy food, and obtain shelter and medical attention.