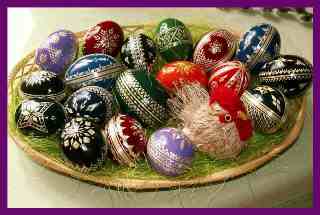 In Medieval Europe, eggs were forbidden during Lent. Eggs laid during that time were often boiled or otherwise preserved. Eggs were thus a mainstay of Easter meals, and a prized Easter gift for children and servants.

In addition, eggs have been viewed as symbols of new life and fertility through the ages. It is believed that for this reason many ancient cultures, including the Ancient Egyptians, Persians, and Romans, used eggs during their spring festivals.

Many traditions and practices have formed around Easter eggs. The coloring of eggs is an established art, and eggs are often dyed, painted, and otherwise decorated. Eggs were also used in various holiday games: parents would hide eggs for children to find, and children would roll eggs down hills. These practices live on in Easter egg hunts and egg rolls. The most famous egg roll takes place on the White House lawn every year.

The most elaborate Easter egg traditions appear to have emerged in Eastern Europe. In Poland and Ukraine, eggs were often painted silver and gold. Pysanky (to design or write) eggs were created by carefully applying wax in patterns to an egg. The egg was then dyed, wax would be reapplied in spots to preserve that color, and the egg was boiled again in other shades. The result was a multi-color striped or patterned egg.

Germans gave green eggs as gifts on Holy Thursday, and hung hollow eggs on trees. Austrians placed tiny plants around the egg and then boiled them. When the plants were removed, white patterns were created.

Hares and rabbits have long been  symbols of fertility. The inclusion of the hare into Easter customs appears to have originated in Germany, where tales were told of an “Easter hare” who laid eggs for children to find. German immigrants to America — particularly Pennsylvania — brought the tradition with them and spread it to a wider public. They also baked cakes for Easter in the shape of hares, and may have pioneered the practice of making chocolate bunnies and eggs.

Easter cards arrived in Victorian England, when a stationer added a greeting to a drawing of a rabbit. According to American Greetings, Easter is now the fourth most popular holiday for sending cards, behind Christmas, Valentine’s Day, and Mother’s Day.