The History Behind Groundhog Day!!! 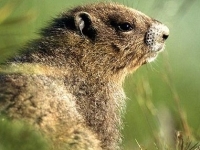 Groundhog Day, is celebrated across the United States and Canada, on February 2, is purely a North American tradition. It is based on a belief that on this day (February 2) the groundhog, or woodchuck, comes out of hole after winter hibernation to look for its shadow. If the shadow is seen, it’s a sunny day. And the groundhog foretells ‘six more weeks of bad weather’ and thus a lingering winter. But spring is coming if no shadow is seen because of clouds. The groundhog then behaves accordingly. It goes back into the hole if the weather turns bad, but stays above ground if spring is near.

Thus weather prediction or prognostication came as an integral feature of Groundhog Day tradition. This prediction owes its origin to the European tradition of Candlemas. There is an old European supposition that a sunny Candlemas day would lead the winter to last for ‘another six weeks’. Also celebrated on February 2, was used to commemorate the Purification of the Virgin Mary. Candles for sacred uses were blessed on this day. Gradually the traditions at this Candlemas came to associate with them different folklores. The German added the belief of an animal, initially a hedgehog, being frightened by his shadow on Candlemas would foretell that winter would last another six weeks. This belief was brought in America during the 18th Century by the German settlers. These settlers adopted the groundhog as their weather predictor.

The Groundhog Day came into being in North America during the late 1800s. Thanks to the combined effort of Clymer H. Freas, a newspaper editor, and W. Smith, an American Congressman and newspaper publisher. They organized and popularized a yearly festival in Punxsutawney, Pennsylvania, the State was populated predominantly by German settlers. The festival featured a groundhog named Punxsutawney Phil which used to foretell how long the winter would last. This very popular event is still being held and is called Groundhog Day.

As light emitting from a source gets hit by an opaque object a shadow is created away from the source and on the other side of the object.

Shadows under the sun are created when the sunrays get hit by any opaque object – living or not. As the sun moves on from east to west shadows are created. Thus shadows are the longest when the sun is in the east or, west horizon. At around noon when the sun is perched just overhead, the shadows get reduced to a minimal length. The movement of shadow in sync with the sun could be applied in making a sundial, the earliest form of clock known to give a near perfect reading.

This shadow movement also changes with the change of season. In winter as the North Pole leans away from the sun light falls a bit slanting on the objects in the North. Thus shadows are always a little longer throughout the winter days as against those during the summer. The variation in this shadow movement also helps us to predict the shifting of the seasons.

Now is it really possible to predict if spring is near or far?

Well, on February the sunlight is already bound for summer as the North Pole comes nearer the sun. The length of shadow is thus somewhat shorter, but not remarkably enough. So it is difficult to distinguish between a late January and a late February shadow unless you are a keen regular observer.