By: Timothy|Published on: Dec 24, 2008|Categories: In The News, Local Events, Uncategorized| 0 comments 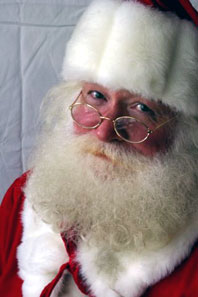 NORAD is the bi-national U.S.-Canadian military organization responsible for the aerospace and maritime defense of the United States and Canada. NORAD, created by a 1958 agreement between Canada and the United States, provides advanced warning of impending missile and air attack against its member nations, safeguards the air sovereignty of North America, and maintains airborne forces for defense against attack.

NORAD’s mission has evolved over the years. The most recent “evolution” in our mission came as a result of the tragic events of September 11, 2001. NORAD now coordinates closely with the Federal Aviation Administration (FAA) and NAV CANADA to monitor the airspace within Canada and the United States. In addition, the command also conducts maritime monitoring.

The men and women of NORAD are constantly watching the skies and waterways of the United States and Canada to keep us safe.

Why We Track Santa

For more than 50 years, NORAD and its predecessor, the Continental Air Defense Command (CONAD) have tracked Santa’s Christmas Eve flight.

The tradition began in 1955 after a Colorado Springs-based Sears Roebuck & Co. advertisement for children to call Santa misprinted the telephone number. Instead of reaching Santa, the phone number put kids through to the CONAD Commander-in-Chief’s operations “hotline.” The Director of Operations at the time, Colonel Harry Shoup, had his staff check radar for indications of Santa making his way south from the North Pole. Children who called were given updates on his location, and a tradition was born. To listen to Colonel Shoup talk about the experience, click here.

In 1958, the governments of Canada and the United States created a bi-national air defense command for North America called the North American Aerospace Defense Command, also known as NORAD. NORAD inherited the tradition of tracking Santa.

Since that time, NORAD men, women, family and friends have selflessly volunteered their time to personally respond to Christmas Eve phone calls and emails from children. In addition, we now track Santa using the internet. Last year, millions of people who wanted to know Santa’s whereabouts visited the NORAD Tracks Santa website.

Finally, media from all over the world rely on NORAD as a trusted source to provide Christmas Eve updates on Santa’s journey.

How We Track Santa

Tracking Santa starts with the NORAD radar system called the North Warning System. This powerful radar system consists of 47 installations strung across the northern border of North America. On Christmas Eve, NORAD monitors the radar continuously for indications that Santa Claus has left the North Pole.

The moment that radar indicates Santa has lifted off, we use our second detection system. Satellites positioned in geo-synchronous orbit at 22,300 miles from the Earth’s surface are equipped with infrared sensors which enable them to detect heat. Amazingly, Rudolph’s bright red nose gives off an infrared signature which allow our satellites to detect Rudolph and Santa.

The third tracking system is the Santa Cam network. We began using it in 1998, which is the year we put our Santa Tracking program on the internet. Santa Cams are ultra-cool, high-tech, high-speed digital cameras that are pre-positioned at many locations around the world. NORAD only uses these cameras once a year on Christmas Eve. The cameras capture images and videos of Santa and his reindeer as they make their journey around the world.

The fourth system is made up of fighter jets. Canadian NORAD fighter pilots flying the CF-18 intercept and welcome Santa to North America. In the United States, American NORAD fighter pilots in either the F-15 or the F-16 get the thrill of flying alongside Santa and his famous reindeer: Dasher, Dancer, Prancer, Vixen, Comet, Cupid, Donner, Blitzen and, of course, Rudolph.