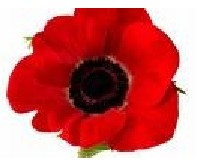 How Do We Remember?

On November 11, especially, but also throughout the year, we have the opportunity to remember the efforts of these special Canadians. In remembering, we pay homage to those who respond to their country’s needs. On November 11, we pause for two minutes of silent tribute, and we attend commemorative ceremonies in memory of our war dead.

Following the First World War a French woman, Madame E. Guérin, suggested to British Field-Marshall Earl Haig that women and children in devastated areas of France could produce poppies for sale to support wounded Veterans. The first of these poppies were distributed in Canada in November of 1921, and the tradition has continued ever since, both here and in many parts of the world.

Why poppies are worn as the symbol of remembrance, a reminder of the blood-red flower that still grows on the former battlefields of France and Belgium. During the terrible bloodshed of the second Battle of Ypres in the spring of 1915, Lieutenant-Colonel John McCrae, a doctor serving with the Royal Canadian Army Medical Corps, wrote of these flowers which lived on among the graves of dead soldiers:

In Flanders Fields the poppies blow
Between the crosses, row on row,
That mark our place; and in the sky
The larks, still bravely singing, fly
Scarce heard amid the guns below.

The flowers and the larks serve as reminders of nature’s ability to withstand the destructive elements of war by men, a symbol of hope in a period of human despair. In Canada, traditionally the poppies which we wear were made by disabled Veterans. They are reminders of those who died while fighting for peace: we wear them as reminders of the horrors of conflict and the preciousness of the peace they fought hard to achieve.

The two minutes of silence provide another significant way of remembering wartime while thinking of peace. Two minutes are scarcely enough time for thought and reflection. As we pause and bow our heads, we remember those brave men and women who courageously volunteered for the cause of freedom and peace.

For those who lived through these wars, remembering means thinking of comrades. It evokes memories of men and women who never returned home. Those born after the wars might picture the youthful soldiers who eagerly joined up from high schools, businesses and farms across the country, only to meet death while fighting against the enemy. They may imagine the anguish of a man leaving a new wife, a young family, an elderly mother. The important thing for all of us to remember is that they fought to preserve a way of life, Canadian values, and the freedom we enjoy today and often take for granted. Remember that the silence is to honour their sacrifice and memory.

There are memorials to commemorate the service of Canadian troops in Canada and overseas. The National War Memorial in Ottawa was originally designed to recognize those who served in the First World War. It has been rededicated to symbolize the sacrifice made by Canadians in the Second World War, in Korea, and in subsequent peacekeeping missions. The National War Memorial symbolizes the unstinting and courageous way Canadians give their service when values they believe in are threatened. Advancing together through a large archway are figures representing the hundreds of thousands of Canadians who have answered the call to serve; at the top of the arch are two figures, emblems of peace and freedom.

The Tomb of the Unknown Soldier is located next to the National War Memorial and contains the remains of an unknown Canadian First World War soldier who was exhumed from a cemetery near Vimy Ridge. The Tomb and its Unknown Soldier represents all Canadians, whether they be navy, army, air force or merchant marine, who died or may die for their country in all conflicts – past, present, and future.

The Books of Remembrance which lie in the Memorial Chamber of the Peace Tower are another record of the wars. In addition, most cities and towns across the country have dedicated a monument, a building, or a room to their native sons and daughters who gave their lives. These commemorative locations are an enduring record of the losses suffered by communities as Canadians went forward to fight for what they believed was right.

One day every year, we pay special homage to those who died in service to their country. We remember these brave men and women for their courage and their devotion to ideals. We wear poppies, attend ceremonies, and visit memorials. For one brief moment of our life, we remember why we must work for peace every day of the year.

The Poppy, the Symbol of Remembrance Day

The adoption of the poppy as a symbol of remembrance has international origins. The first person to use it this way was Moina Michael, a member of the staff of the American Overseas YMCA in the last year of the war. Michael read McCrae’s poem and was so moved that she composed one of her own in response. She recalled later: “In a high moment of white resolve, I pledged to keep the faith and always to wear a red poppy of Flanders Fields as a sign of remembrance and the emblem of ‘keeping the faith with all who died.'”

Consequently, she led a successful campaign to have the American Legion recognize the poppy as the official symbol of remembrance in April 1920. At the same time, Madame Anne Guerin, of France, inspired both by McCrae’s poem and by Moina Michael’s example, also became a vigorous advocate of the poppy as the symbol of remembrance for war dead. Her own organization, the American and French Children’s League, sold cloth copies of the flower to help raise money to re-establish war-devastated areas in Europe.

In 1921, Guerin travelled to Britain and Canada on behalf of the poppy and convinced both the recently formed British Legion and the Canadian Great War Veterans Association (a predecessor of the Canadian Legion) to adopt the poppy as their symbol of remembrance as well. The first ‘Poppy Day’ in both countries occurred on 11 November 1921. The Returned Soldiers League in Australia adopted the poppy as its symbol of remembrance the same year.

For the first year, these artificial poppies were bought from Guerin’s organization in France. By 1922, however, the various countries had started manufacturing them at home. In Canada, they were made by Vetcraft shops, run by the Department of Soldiers Civil Re-establishment and staffed by disabled soldiers. After its formation in 1925, the Canadian Legion (known as the Royal Canadian Legion since 1959) has run the poppy campaign in Canada.

An early edition of the Legion’s magazine, The Legionary, explained the significance of buying poppies made by Vetcraft, as opposed to commercially available copies, as follows: “The disabled veterans in Vetcraft and Red Cross workshops are creating true memorials, while a poppy replica produced under ordinary commercial competitive conditions is nothing more nor less than an artificial flower.”

The artificial poppy continues to flourish as the symbol of remembrance in the week leading up to the official commemorations on November 11. Today, millions of Canadians wear the bright red emblem to remember and honour the many thousands of their fellow Canadians who have died in war.