The following information about smoke alarms comes from Paul, The Fire Guy. Thanks Paul!

The 1997 edition of the Ontario Fire Code contains changes making Smoke Alarms mandatory in every dwelling unit. The landlord is responsible to install and maintain these devices.

Smoke alarms should be installed on every level of your home, including outside sleeping areas. Because smoke rises, you should place alarms on the ceiling. If you cannot do this, place them high up on a wall (25 cm or 6″ below the ceiling), according to manufacturer’s instructions. There are certain locations to avoid such as near bathrooms, heating appliances, windows, or close to ceiling fans. Test your alarm on a monthly basis by using the alarm test button or by introducing smoke from an incense stick or smoldering cotton string. Follow your owners manual.

Change your batteries on an annual basis, and remember to have and practice a Family Escape Plan. 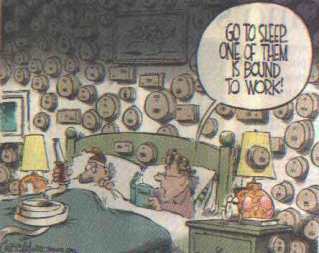 Recently there have been concerns about the reliability of popular Ionization type smoke alarms. Issues have been raised about how quickly they will actually detect smoke from a smoldering fire such as that from a cigarette dropped into furniture, and sound an alarm.

Ionization type will detect fast flaming type fires such as that normally encountered in a house.

Photoelectric type will detect smoldering type fires such as those encountered with careless smoking.

Since no one can predict the type of fire that will occur, it is difficult to recommend which is best. Fire safety can be enhanced by installing both types.

Q. What is the lifespan of a typical household smoke alarm?
A. Smoke alarms don’t last forever. (this emphasizes the importance of having more than one smoke alarm) According to one manufacturers guidelines, smoke alarms should be tested weekly and replaced when they are ten years old. Replace the smoke alarm when it does not test properly. Clean and care for the alarm as described in the owners manual.

Q. What locations in homes should be avoided when installing smoke alarms?
A. Manufacturers state to avoid locations where smoke may not reach the alarm in time to provide early warning, or where the alarm may not be effective.

Do not place smoke alarms:

In or near turbulent areas of your home such as doors, windows, fans etc. In or near dead air space such as the peak of an “A” frame ceiling. In rooms with simple sloped, peaked or gabled ceiling, install smoke alarms on the ceiling 90 cm from the highest point. In or near very hot or cold areas where the temperature exceeds 38C (100F) or falls below 5C (40F).Less than 25 cm (6 in.) from the wall when mounted on the ceiling.

Q. In what rooms should a smoke alarm NOT be located?
A. In the bathroom. High humidity can interfere with the sensing chamber. In the kitchen. Normal cooking will activate most smoke alarms.

Q. Where should smoke alarms be located in the home?
A. Smoke alarms must be located on each floor level, between the sleeping area and the remainder of the dwelling unit.